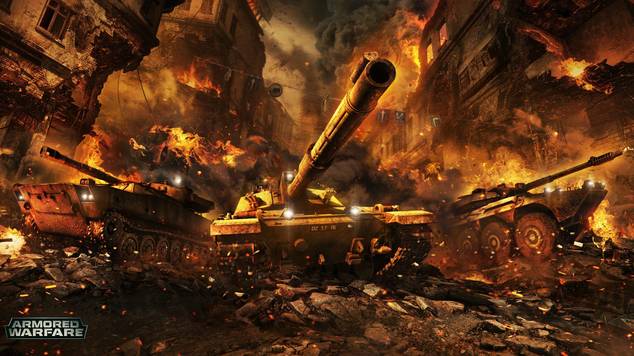 Obsidian Entertainment and My.com have announced the system for both crews and commanders in the upcoming armored vehicle MMOG, Armored Warfare. Crews and commanders will be separate systems, each with their own sets of customizations and restrictions. So far, the community seems pretty positive in response to Obsidian's interesting approach to customization, but there are a few really great questions asked, which will hopefully be answered as development continues. Since Armored Warfare is in development, anyone interested in play testing the game may sign up directly through the AW website at My.com. Before we get into community response, let's first get to the announcement.

Crews are not as customizable as commanders and are generally determined by the tank you choose. Since Obsidian wants to bring in a bit of realism by having crews tied to vehicle choice, due to specializations, and crew members cannot be transferred between vehicles. Questions from the community include whether or not there is a pool of crew members per vehicle to choose from, if you can have an all-American crew driving German tanks (for example), and if you can name your crew members, either by naming them manually or selecting from a pool of names.

Crews will have levels for progression and skills you can select to customize them. Skills will be available depending on “style of play and hardware features,” and it looks like Obsidian is setting up a min/max system, since selection of skills can lead to better overall performance from your crew. “With the correctly chosen skills, vehicles should instead become easier to operate, be quicker to reload or shoot more accurately.” Community concerns here are in regards to unbalanced battles between higher level crews in combat versus lower levels, resulting in “seal clubbing,” where the higher level crews can just steamroll newbies. Since Armored Warfare is still pretty early in its development cycle (currently in alpha), hopefully Obsidian is already considering this issue with ways to alleviate or overcome it.

Commanders, unlike crews, are not vehicle-dependent. They come with their own development paths, as well. Commanders also come with a full background, including a biography and personality traits. You can finally find the tank commander you've always wanted, who enjoys long walks on the beach. Or, in our example of Phillipp here, someone who hates video games. I guess with a man like that around, you won't have to worry about who's turn it is for Xbox time. Like crews, the more you bring a commander into battle, the more he or she will level, which means you'll have more points to spend on skills, and the higher level you become, the more skills you'll have to possibly be learned. “Each time a player will be able to choose one of two available skills and in this way they can create a commander with a unique set of improvements.” Details on commanders are more complex than crews, also. From the announcement: 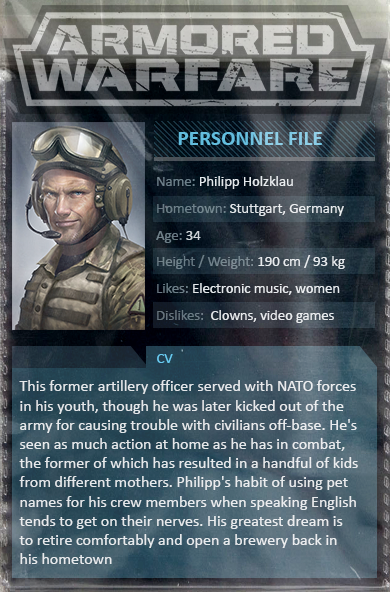 Here are some examples of commander characteristics:

Here are some examples of commander skills:

Commanders will have several dozen skills available from which a player should choose 8 sets of 2 skills.

Each player gets three commanders at the start of the game. Later on this number can be increased. Commanders can be recruited with game currency, by achieving certain levels or by carrying out special missions.

Commanders have their own qualification levels. The narrower the commander's specialization with a certain tank, the higher the maximum level of improvements available to them and the more character points they receive per level.

Veterans — These commanders are less common than Generalists and are more limited in their usability; for example, limited to a specific range of tiers and roles. So a Veteran Commander might be limited to Tier 1-3 AFVs/TDs.

Masters — Master Commanders are the rarest and restricted Commanders in Armored Warfare and can only command between 1 and 3 vehicles. They gain 6 Stat Points per level, the most out of any Commander class. Obtaining a Master Commander will be a significant accomplishment for players as they will become available only at level 50.

Exclusive – unique commanders who players can get only during special events. Their characteristics may differ or correspond to any level of qualification from Generalists to Masters. Players will be able to get 2 of these exclusive commanders before the game launches.

You'll be able to collect and level multiple commanders in Armored Warfare, and commanders are seen as one more way you can further customize your vehicles. Another concern with level disparity and imbalance is putting a level 60 commander into a low level or new vehicle. Does Obsidian have a plan to curtail commander seal clubbing? Will there be a nationality limit on commanders, or will any commander be able to freely command any vehicle of your choosing? Should crews be able to diversify, in case your gunner needs to take over as driver? Can a crew trained for a heavy armored vehicle move to another heavy armored vehicle, or is the restriction on each vehicle? Will there be a method to recruit crew members, similar to commanders? Can I make an all-female crew just to annihilate this guy (please, women soldiers do not need Mr Jesus Avatar white knighting them, dude).