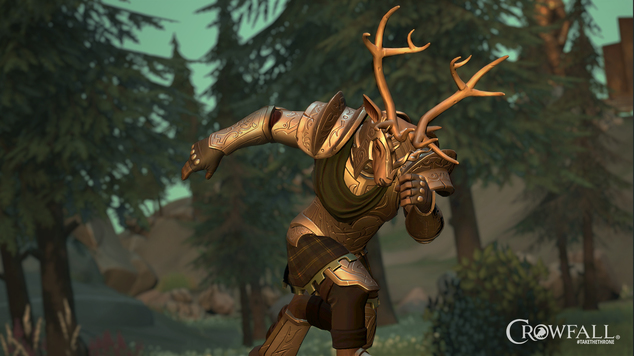 Crowfall Bags Funding For The Finish Line
Can the extra cash bring Crowfall up to scratch?

Crowfall Bags Funding For The Finish Line. In some positive news for ArtCraft Entertainment, they've recently completed a new round of funding totalling $11 million to finish the game, and bring it to a launch market.

I played Crowfall only this morning to see how it's progressing, and while it's difficult to say in terms of gameplay (so few folks were on), there's seemingly been huge improvements to the performance. At maximum settings, my game never dipped below 60fps, which is a huge improvement. It also looks and feels pretty good, although animations could do with some work.

It's difficult to know how well the game will do, as it seemingly has very little traction even after all this time. Then again, when something is so far off, is that entirely surprising?

In total, I think they're well past $40 million in terms of backers and private funding and that, as far as I can tell, is staggering. I really do hope the game does well, as it has so much promise. Full PR details below.

AUSTIN, Texas, January 28, 2020 — Independent Game developer, ArtCraft Entertainment, Inc., announced today that the company has closed on a $11.7 million raise from investors marking the final financial step in completing and launching the company’s highly-anticipated video game, Crowfall™. A vast virtual universe that players can explore, conquer, and rule, Crowfall is a unique experience where one player’s actions can change the history of the game, forever.

In addition to crowdfunding, Crowfall is financed through traditional investments. That dual funding strategy helps the team avoid the need to constantly tap their players with offers of new items or programs in order to keep development monies flowing.

“We are extremely thankful to our investors who have stepped up to provide us with the financial means to get Crowfall to the finish line,” exclaimed J. Todd Coleman, ArtCraft Entertainment co-founder and chief creative officer, “and, of course to our backers – without whom we wouldn’t have had the opportunity to bring this game to life.”

A massive crowdfunding success, Crowfall stands out among independent studios, boasting an impressive $5.7 million in pledges in addition to the more than $30 million in funding collected from technology licensing, distribution agreements and previous investment rounds.

“The timing of this round is perfect, as we gear up to start Beta this quarter,” explains Gordon Walton, co-founder and president. “More than 300-thousand players have signed up to help us test the game in Beta, which will give us the scale we need to make sure the service is ready at launch.”

The Beta version of the game, currently being tested internally, includes significant features including the much-anticipated Guild-vs-Guild ruleset allowing guilds to compete directly for control of campaign worlds in the Crowfall universe. This experience is supported by several unique gameplay tentpoles; Divine Favor, a strategy game that allows players to appeal to Crowfall’s diverse pantheon of Gods, and customized City Building to give guilds the chance to build unique castles and fortifications to defend and hold. Together, these features deliver an innovative experience where players control the fate of the universe.

About ArtCraft Entertainment, Inc.
Headquartered in Austin, ArtCraft Entertainment, Inc. is an independent developer and publisher of interactive entertainment for consumers around the globe. Founded by industry veterans J. Todd Coleman (Wizard101, Shadowbane) and Gordon Walton (Ultima Online, Star Wars: Galaxies, Star Wars: The Old Republic), the Company develops and publishes products on multiple platforms. The first game, Crowfall, is set to begin Beta testing in Q1 and launch in 2020. For more information, please visit the product site at https://crowfall.com or contact us via email at [email protected]. ArtCraft is part of the vibrant Austin, Texas game development community, which includes nearly 100 game companies and more than 2,000 game developers.