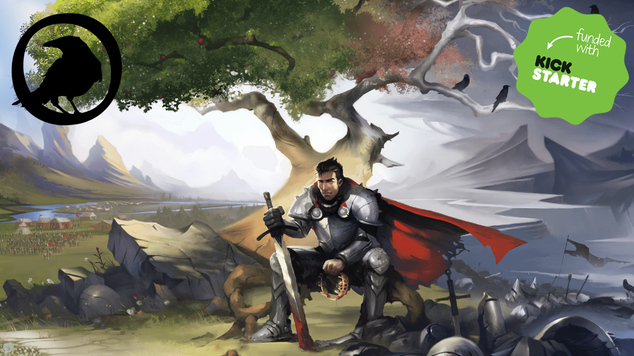 Crowfall has officially launched it's Kickstarter Campaign, which is full of lots of new info about the upcoming Strategy-MMORPG self-titled a "Throne War Simulator".

It's about time, right!?

I know that's what a lot of people are probably saying to themselves, though it's tough to say whether the move to Kickstart was the optimal choice over an internal founder's program. It is indeed about time, because only time itself will tell us the wisdom in this choice. I have a lot of hope in this game, and I feel confident that there is definitely an audience for this that isn't currently being fed by any MMOs currently on the market. The genre really needs this game to succeed, so I definitely plan on contributing (at the very least to see us continue to push forward with more dynamic gameplay, emergent AI, and well... just more innovation itself!)

It's also apparently about destruction

ArtCraft isn't shy at all about promoting the dynamic environment it's seeking to bring to the genre. In contrast to other self-proclaimed "next gen" titles that are already launched and fully released, Crowfall is actually innovating. They aren't just dropping in a few more cleverly scripted quests or throwing in a few new AI dynamics on top of the same old static world. Everything changes in this game, including the worlds themselves! Literally entire server-worlds will alter and get regenerated and recreated into a new form as the planned campaign resets form a wide variety of games-within-the-game. The recent addition of Voxel Farm (which I talked about in my column last week) is a huge asset for this engine in adding a world that you can truly alter and change, physically.

If the inner campain worlds are promising the many permutations and true dynamic injection of freshness to the game... than it is the permanent outer worlds that truly bring this game around full circle. While not necessarily intriguing or wildly different on their own than the traditional MMO experience - the ability to leave and compete in massive long-duration campaigns and return with spoils of war to begin erecting a permanent player-run empire on a unique world of your own truly changes the game. It's almost like a world-sized Warcraft Garrison, except full of real, other players - a true social community to build with friends and strangers alike.

If anything, my only real concern is the lack of character customization I'm seeing at the earliest showings. We'll still have to learn more about how the archtypes and character building works - but as an avid role-player, it's going to be more challenging to accept the strict race/gender/specialization restrictions that look to be heavily interlocked compared to other games we're used to. It may be a healthy and good change - but it definitely doesn't help creating a truly unique character any easier. We'll see though. I'm too much of a fan of all the other components to criticise that aspect too much. Besides, this game looks to be much more about the war, strategy and combat than it does the role-playing elements.