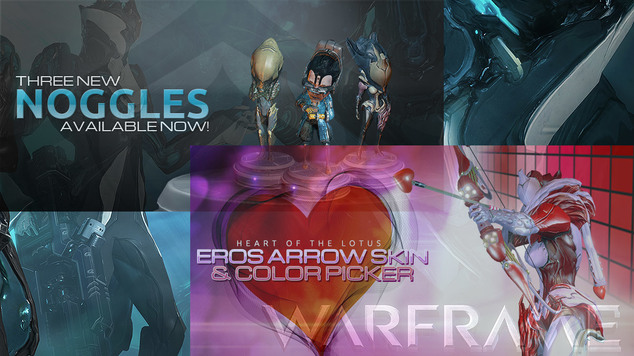 Warframe Update Brings Player Hubs to Console & VDay Event
Warframe has launched its latest update to the PS4 and Xbox One, while PC players get new Noggles and the Valen

A lot going on in the world of Warframe. First of all the Destiny like hubs called "Relays" have finally arrived on console, so a big rejoice for fans of Warframe on the console. If you haven't gotten Warframe on the console yet, you super need to, it lends itself well to the medium. Anyway, so there is that. The relays have a lot going on with them, including a trader and enclaves to go and hang out in. It's a big social element for a game that involves traveling to planets and bases to fight the bad guys.

Here is what the press release highlights with the relays:

Players on PC shouldn't feel left out, with Warframe's aggressive release schedule there has been two updates in the last two days. The first brings three new Noggles to the market. The second is a hotfix which activates the Valentine's Day event.  It includes an Eros arrow skin, a valentine's color picker, and the following list of hotfixes: