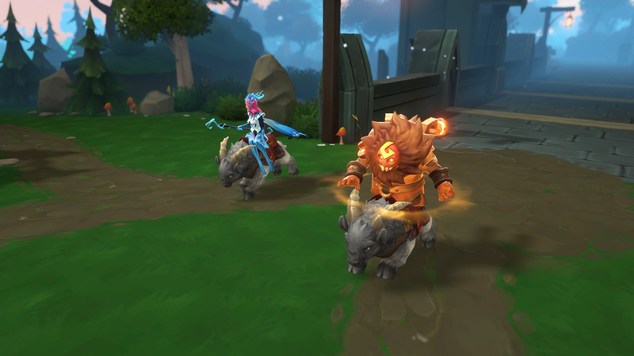 Battlerite Royale: 10 Tips To Win
Want to finish in the top 3? Here's our best advice.

Battlerite Royale is undoubtedly challenging. Not only is it fast paced, but there’s a great deal of vulturing and a constant need to fight enemies if you’re to come out on top. As with any Battle Royale game, there’s a heavy dose of RNG, but there’s many things you can do to mitigate this to reliably land in the top 3. It should be noted however that you should expect to die plenty of times before getting to grips with Battlerite Royale, and until you comfortably learn your enemies’ kits as well as your own, don’t expect to win every time.

Land Near The Action, Not In It 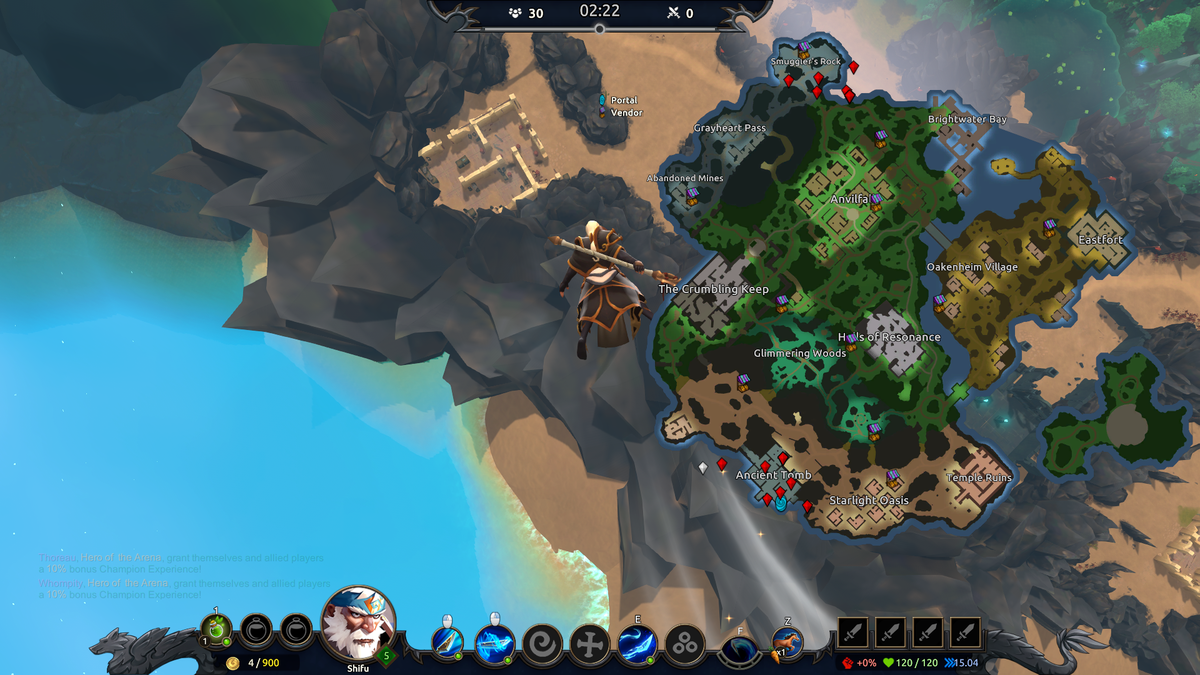 Landing in locations that aren't "hot-spots" will ensure an early kit, and gaurentee you avoid a scrum.

With two Wyverns now taking flight, players are much more spread out than they were. While there will be still be moments where both Wyverns and players land near each other, in most cases you’ll now be some distance from the nearest enemy. I’ve found that landing with the map open, and ensuring you’re in a safe spot - but reasonably close to nearest player - ensures that you can gain early items in peace, before navigating towards where early fights occur. In most cases, those who have dived into an early scrum will be weak and/or haven’t looted by the time you arrive. At that point, you can often clean up.

Vulture When You Can

Vulturing is incredibly important in Battlerite Royale. If you’re not aware of what that is, it’s basically joining a fight late to pick off players who are already low health. It’s lame, but undoubtedly a valuable tactic, as it ensures you can sweep it and pick up multiple kills with ease. It’s important that you listen for fights around you, or enemies drinking potions as these are indicators of players who are likely to be low health, and easy kills. If you can, sneak up onto a fight and wait in a bush before appearing and finishing foes off.

After A Kill, Leave Quickly

Despite Champions dropping a health potion on death, with Battlerite Royale marking the map with a red cross where you successfully killed an opponent, most enemies will flock to this quickly. Typically there isn’t time drink your health potion, and be sure that enemies won’t hear you. If you can, as soon as you’ve grabbed a kill, mount up, pick up items you need, and run away. When you’ve gotten far enough away to heal safely, feel free to return back to your killing grounds to look for enemies who have crept in to vulture.

There’s no point holding your gold in Battlerite Royale unless you’re close to purchasing something, and can afford to wait a few seconds to gain a couple more coins. You need to keep moving, and considering all merchants sell different items, hanging around one spot isn’t a good use of your time. If you’ve around 330-360 gold in your pocket, navigate to a Merchant and buy what they’ve have, as long as it’s a clear upgrade. Legendary abilities or Legendary items are a must, and in most cases, it doesn’t matter which you grab as long as you’re improving. In most cases, any Legendary item is a vast improvement: the same can be said for abilities.

There’s two reasons why: you’re wasting time, and you’re likely to succumb to another player hoping to vulture your fight. If you can’t kill someone quickly, within a contained location, just leave and find someone else. Hanging around will likely see you killed by other players who hear your fighting. Save yourself the hassle, and find loot and a weaker opponent elsewhere.

As Talon Island begins to get smaller, fighting without interference from others becomes incredibly challenging. It’s also incredibly risky to fight in the opening knowing that surviving players are flooding into the final circle. There’s a great deal of value in hanging back until the death vortex begins to close. When it does, slowly navigating towards the final circle - using bushes to hide in - while waiting for the player count to get smaller and smaller, ensures you enter the last moments on full health, with full items, with a depleted enemy. 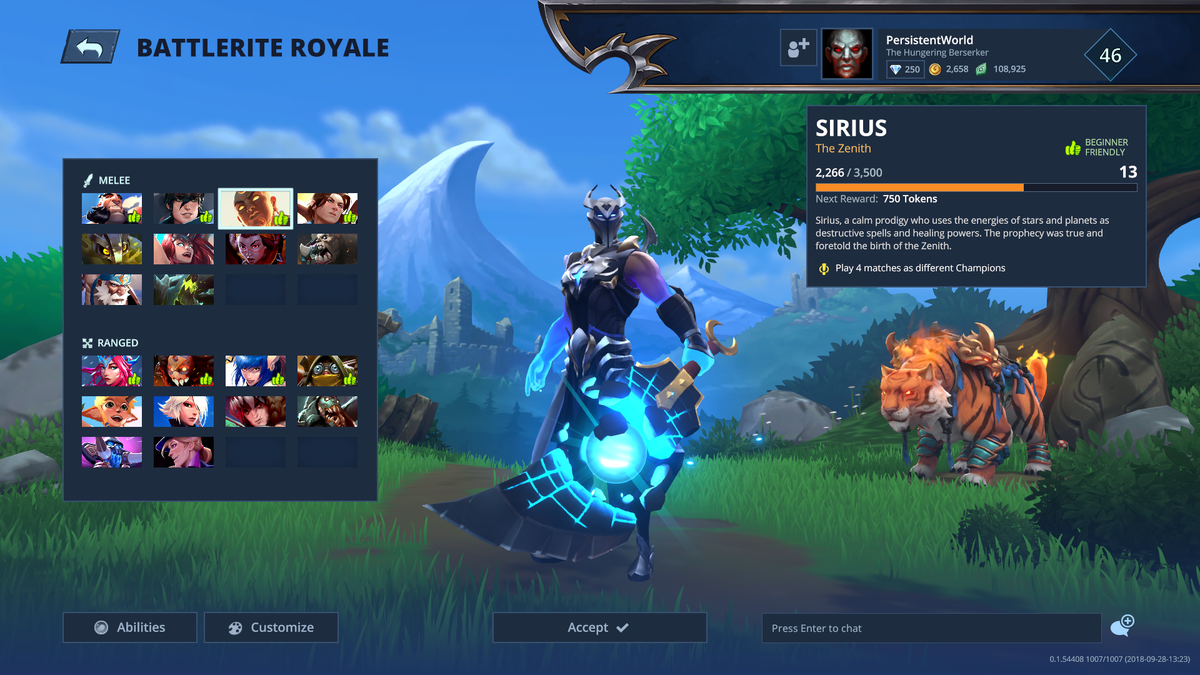 Sirius is my go-to, but I've hundreds of hours invested in every single Champion thanks to Battlerite.

I know this sounds incredibly time intensive, but learning every Champion will help you enormously when it comes to fighting opponents 1 on 1. Knowing Champion kits ensures you understand their rotations, limitations and cooldowns. You’ll know how long Varesh has until his counter is next available, you’ll know the length of Ashka’s Ultimate, and you’ll know how weak Rook is when he fails to trigger his counter.

Some Champions need all their kit. Some can function incredibly well with only the starter abilities. Understanding your Champion and their limitations - and how far you can push them in a 1 on 1 fight - is incredibly important. Much of this comes from practice, while some of it is also incredibly obvious. In most instances any ranged Champion does well by default: they’ve a strong basic, and an ability to escape. Where melee is concerned, it’s far worse. Champions such as Shifu need almost all their kit to get any mileage.

Yes, I know it sucks that some Champions right now are stronger than others, but considering Battlerite Royale is in early access, that’s not surprising. Stunlock Studios are amazing at balancing Champions, but they need time in this new venture. Champions such as Rook are a liability (he can’t heal himself, can’t jump over scenery and his Rush has too longer cooldown) while the likes of Jumong are ridiculously strong (masses of control, damage and mobility). Picking a Champion that’s considered top-tier will help you enormously.

I see plenty of players failing to use items that they’ve collected, and yet the vast majority are amazing. A particular favorite is the Meteor and as I’m reaching the end-game, I tend to amass 3. Dropping them all to close off the entire final circle ensures you can survive for long periods, while buying time to regain cooldowns or heal up. Other items such as the Turret is ridiculously strong, while even the basic Rock can ensure that you can knock enemies out of the final circle into the Death Vortex. Use your items!