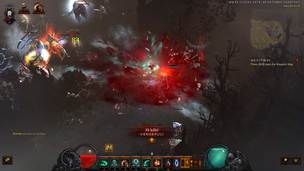 Diablo III Review - Hell freezes over, it actually came out!

Diablo III was released on May 15th, and many sleepless nights later I decided it was time to write this review. Everything you know and love about Diablo 2 exists in the third game, except that it's either cranked up to 11 or simplified to meet genre standards. In some cases, these simplifications are a glorious thing; in others, they are an annoyance that makes you wonder why the amazing polish team at Blizzard overlooked them. And that "how could they miss this?" scenario describes the third game in a nutshell--it offers the perfect formula, but the few flaws that permeate it keep it from that perfect rating.

Hell is a mean place, and you are particularly mean to its denizens. Blood and violence are the name of the game, and the "cartoony" look of things doesn't dampen the effect.

We all know how the clickety-clicking core formula of the game works, and I’m happy to say that it’s still fun as hell. (Yeah, pun intended.) You pick one of five classes, then run amok bashing enemies, collecting loot, tackling the random enemy spawn packs, besting bosses, and watching cut scenes with more budget than most movies this summer.

More things are scripted than in previous iterations of Diablo, with ambushes happening frequently and more player interaction with the environment. Unfortunately, though, player interaction with the environment can have a negative affect on game play because many bosses tend to impact large sectors of the playing field with fire or other negative things that can make you regret being there in a hurry. They typically only do this during certain phases though, so it’s not a not a nuisance through the whole fight.

Enemies will happily walk into your death-dealing tools.  For once I won't complain about the AI, because if the 100,000 enemies I kill throughout this game all had evasive manuevers, it'd be a lot less fun than punting skeletons off cliffs effortlessly!

So I just mentioned phases and environmental damage/don’t-stand-in-the-fire mechanics. Yes, this game has evolved partially into WoW in that respect...and in others as well. Loot is now sold at the auction house. Public player interaction is now completely random--you have no idea whose game you are joining when you sign up for a quest. Loot is even distributed to players automatically, and this is a double edged sword--while you don’t have to fight for what you get, you won’t know what the other players got unless they happen to brag about it. Remember trading for that coveted set item that just dropped? Sadly, that option seems to no longer exist.

Also, I hope you like debuffs--every class brings them to the table and stuns even work on bosses fairly well all through Nightmare. Yes, you can almost stun lock Diablo himself. (Pardon me if I find that a bit of a buzzkill.)

This evolution in the series is admittedly for familiarity and simplicity’s sake, though. Attack speed is now broken down to a numeric value, which I am thankful for, but many other stats are far simpler, for better or worse. It makes equipping a class a breeze compared to finding specific super bonuses like the second game. No longer do you have to seek out super specific stat items or the finest builds in order to get your desired character cranking--you now learn everything automatically with levels. I’m a little miffed by this. I feel that the ability to switch builds whenever and wherever destroys player uniqueness.

The standard Blizzard polish shows everywhere in this title. Everything from the UI to physics is spot on and I have next to no complaints about it. There’s a mix of cut scenes, from traditional super-detailed ones to more imaginative hand-drawn ones that are voiced by the character you’re playing as, depicting their struggle against the darkness in a more personal manner.

There are a few blunders, though, most notably the auction house. Why is it not accessible in-game? Everything else is streamlined perfectly and while I’m certain it’s a database issue that can’t really be worked around, it feels silly to have to drop what you’re doing and hit the main menu in order to shop around. Want to get around it and use trade games? Too bad! The inability to create named games like before turns the entire player market into either your battle.net friends, or the auction house. Act 4 also feels a little less polished and finished compared to the rest of the game, or maybe that’s just Diablo’s influence.

While a beautiful game on the surface almost regardless of machine power, I do wish Diablo III pushed the envelope a bit further. There’s very little in this game that couldn’t have been done 5-7 years ago. Still, when battle erupts and enemies are getting pummeled about, the bloody details and flying bodies are a sight for sore eyes. The cut scenes are top notch in every way and once again prove that Blizzard is one of the kings of the industry in that respect.

For those of you who always wanted to wear a tiki mask, the Witch Doctor does not disappoint.  Their masks are crazy!

Special mention goes to the amazing character armor designs. Some were worried that Blizzard couldn’t pull this off after the … mismatch fest that is WoW. Rest assured that they did, and your barbarian or monk will look every bit as badass as he/she should.

Sporting much more voice than before, both from players and NPCs, it was important that Blizzard pull no punches in selecting quality voice actors--and they didn't. Every character--from a scared Tristam villager to Diablo himself--sounds appropriately good, scared, or prime evil. When people arent talking, the epic soundtrack fills the scene and sets the mood. Easily the highlight of the game, everything sounds perfect. From the moment you hear that familiar item drop noise that hasnt changed in 20 years you know youre home.

The music is perhaps the most lasting and iconic aspect of the Diablo series, and was a genuine concern for me throughout the beginning of Diablo III. As many have noted, the opening overture is full of over-the-top Wagnerian brass and doesn't quite pair with the seductive yet solitary (and somehow maniacally-driven) stylings that are part and parcel of the series. That, and the music of Tristram seems an outright ripoff of Matt Uelmen's masterful work. But, happily, Russell Brower's own style starts to peek through with the start of Act II and crescendos upward through the final encounter and into the credits, making Act I more homage than outright hosing.

While the four-player cap and lack of PvP are a pretty big bummer, the multiplayer is every bit as strong as it was before. The addition of more debuffs encourages party play, and the enemies are a bit stronger than before with multiple players to encourage actual team movements rather than 8 guys randomly massacring a zone. This is emphasized by the fact that everyone gets their own loot from kills, so an issue that was problematic with Diablo II is fixed.

Guys! Join my game! My lightning won't fork to hit you, even if I wanted it to!

Still, the inability to create ‘themed’ games such as chat, trade, PvP, lore, whatever is a detractor. I never thought about how much the ability to name or join a named game would matter--after all, Starcraft II did this to custom games, but you knew what you were getting into regardless because of the map you double-clicked on. I hope Blizzard enables named games down the line, because not everyone wants to steamroll bosses and get rares all day.... Oh wait, I forgot what game this is.

With an additional difficulty setting compared to previous games, Blizzard seems to be trying to stretch your $60 further this time around. The game is still winnable until Inferno with virtually every build, but once you get there, its a bit of a rude awakening from Act II on. Itll become a slugfest that consumes perhaps a few hundred hours of your life, if not your soul. Plus, let's not downplay the fact that Battle.net is still gloriously free - a fact much in doubt for most of D3's run up.

It has been a while since I could endorse a game at the new retail sticker price, and I must say that your wallet will thank you from the meals youll forget to eat and movies youll miss from staying in and pummeling Hells forces.

With enough content to keep a working man busy for years, and the inevitable expansion or three around the corner to touch on the other prime evils, theres no doubt in my mind that Diablo III is here to stay. However, this game does not replace Diablo II. At the end of the day, I feel that Diablo II is a more twitch game that rewards perfect play (and punishes mistakes immensely!) where Diablo III is a more balanced game that is designed to be played and enjoyed by all, and not just the people who love to farm.

While near perfect--youll be drooling for more on your first play through no matter what--the shimmer does wear off a tiny bit on successive play throughs and youll begin to notice flaws yourself that hamper the experience ever so slightly. Thats the most important part though--none of these flaws are so great that you throw your hands up in disgust.

Instead, youll still be pummeling monsters until dawn. Youll still hunt Diablo down. Everything you love about the formula has not changed all that much, and the core game is still strong enough to become your obsession and/or the downfall of your relationship with your significant other. 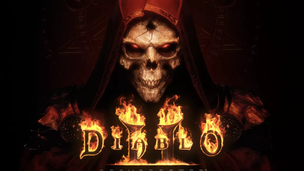