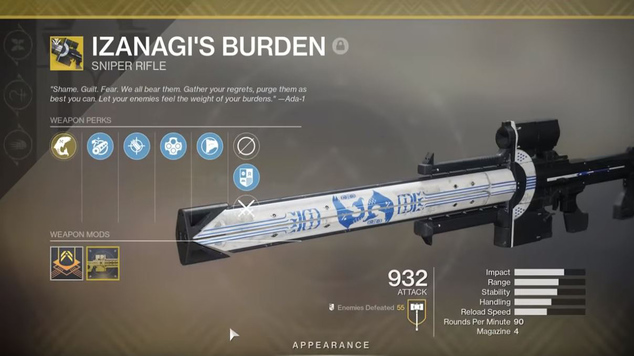 Destiny 2 Shadowkeep Izanagi's Burden Bugged
It's not quite working as intended...

Every game has bugs, some more frustrating than others.

Izanagi's Burden is considered by many to be the best DPS (Damage Per Second) weapon in Destiny 2 Shadowkeep. To attain this weapon players must complete a long and winding quest.  It's worth it, but it's definately not a simple process. Izanagi's Burden even made KackisHD's Highest Damage Loadouts list.

For about a month players have been unable to move through the quest due to a bug, which was fixed (Huzzah!) in the December 29th patch. Unfortunately, other things were broken that continue to prevent the acquisition of this awesome weapon.

The hardest part of this for players isn't even that they can't get the weapon.  It's that they are working their tails off for hard to get quest items only to lose them when the quest bugs.  Ouch!

Bungie is aware of the problem and working on it.

We are aware of new issues regarding the Mysterious Box quest for Izanagi’s Burden and are currently investigating.

Players are encouraged to not use their Obsidian Crystals or Forge Keys until this issue has been resolved.

While you wait.. herre are the Lewis' choices as the 5 Best Weapons in Destiny 2 Shadowkeep.

Here's to hoping that the bugs are fixed quickly.