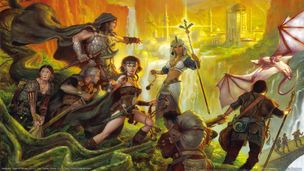 Loading... is the premier daily
MMOG news, coverage, and
commentary newsletter, only from Ten Ton Hammer.

Falling in love with a MMOG can lead to disappointment, as
many a disillusioned gamer will profess. And yet, marketing teams are
tasked with leading us down the heady path to full-on infatuation.
Occasionally, despite our cynicism and our efforts to remain neutral,
we tumble head over heels and find ourselves fascinated with a game
that looks to be The One. And is that really a bad thing? Karen
"Shayalyn" Hertzberg shares her opinion in today's Loading... Perfect
Game Syndrome.

You vote with what you
view at Ten Ton Hammer, and the
result is the Ten Ton Pulse ( href="http://www.tentonhammer.com/thepulse/" target="_blank">What
is The Pulse?).

Here
are today's top 5 Pulse results over the last week:

I've learned the hard way that putting a game on a pedestal is the
surest road to heartbreak. I camped for a couple of years on the
Vanguard forums absorbing everything I could about this "perfect" game
and becoming an expert on every detail of its development. Although
Vanguard most certainly played me for a fool, I can't complain--my love
for it was instrumental in my landing a spot on the Ten Ton Hammer
team, which is something I don't regret.

We MMO gamers may be an href="http://www.tentonhammer.com/node/78828"> increasingly
cynical lot, but every now and then, despite our best
intentions, the hype gets us. Yet perhaps hype is an unfair
word. By definition hype refers to the use of publicity
(through advertising, press releases, websites, et al) to generate
excitement over a product or service. That isn't a bad thing in and of
itself, in fact it's necessary for the survival of just about anything
in a commercial marketplace, yet the word hype still has a negative
connotation. We're trained to view most marketing tactics with
skepticism.

P.T. Barnum, the famous American showman, is credited, href="http://www.historybuff.com/library/refbarnum.html">perhaps
erroneously, with saying, "There's a sucker born every
minute." And while suckers may have been plentiful in the mid- to
late-1800s when mass media wasn't a factor, and while there's certainly
no shortage of people buying ShamWows and Ginsu knives today, I like to
think the sucker population has decreased exponentially as we've become
more and more immune to the effects of advertising.

And yet, sometimes we still fall. (I have an href="http://www.aerogrow.com/">AeroGarden to
prove it although, in my defense, we bought it at a garage sale for a
fraction of the retail price.) I fell for Vanguard,
and my kid has definitely fallen for The Secret World.
Both games took very different approaches to marketing. Vanguard
had Brad McQuaid, EverQuest's main man and a gaming
legend of the time, serving as its co-founder and primary evangelist.
Hero worship ran rampant through the community, and I believe many of
us were convinced that just about anything McQuaid conceived would be
solid gold. We were sold on the idea of a game for the "core"
player--someone not too hardcore, not too carebear, but juuuuuust
right. (In other words, nearly every single one of us.)

The Secret World, on the other hand, has been
marketed as an enigma. While Funcom has released very little
substantial information about the game, they've slowly dished out
lore worthy of speculation and in perfect keeping
with the game's theme of hidden horrific worlds, secret societies and
conspiracy theories. They've left their forum community to discover
hidden gems like the href="http://www.tentonhammer.com/node/79896">Kingsmouth
website, a mock community site for a sleepy seaside town
where strange things are beginning to occur (and with obvious H.P.
Lovecraft tie-ins.) Late yesterday, Funcom unveiled the news that the
community had uncovered the conspiracy themed href="http://www.tentonhammer.com/node/81374">Monsters of
Maine blog--another hint at things to come for The
Secret World. The slow and cryptic dissemination of
information seems to be working, too, because The Secret World's
forum community consists of over 250,000 hopeful gamers--a pretty
significant feat for a game that's seems unlikely to release any time
soon.

"Don't fall in love," I told my son, "Loving a game as much as you love
this one only leads to disappointment." And yet he's fallen in love
despite my sage advice. The boy is smitten--he's in deep smit!--and
there's nothing I can do about it. Like any parent, I don't want to see
him heartbroken, and I certainly hope that he won't be. Maybe his game
of choice will turn out to be everything he believes it will be. Maybe
it won't. But now I've come to regret telling my son to stay away from
the heady rush of infatuation. It is, after all, rather delicious.

Have you loved and lost? Will you dare to love again? Share your
thoughts in the href="http://forums.tentonhammer.com/showthread.php?t=49825">Loading...
forum.

From our href="http://forums.tentonhammer.com/forumdisplay.php?f=160">WoW
Rant Forum

Imagine the scene: you queue up for a random World of Warcraft
heroic. The group you end up with contains two members from the same
guild who want to go for a specific achievement. You tell them it's
late and you very much doubt that the achievement they're after can be,
well...achieved. They proceed anyhow, all but ignoring you. The tank,
one of the two after the achievement, is pulling at an ungodly slow
rate and you're getting cranky. Despite your protests that the
achievement is "not gonna happen" and you just want to wrap things up,
your group proceeds with their achievement strategy. In a fit of pique,
you DPS the hell out of the boss mob they were trying to "DPS very
slowly," and you nix their chances at scoring the achievement they were
after.

Were you a jerk? For that matter, was our community member, Raknor, a
jerk in this true story of WoW angst? Y href="http://forums.tentonhammer.com/showthread.php?t=49792">ou
be the judge.

"Nothing about that makes you a jerk. If anything, the tank
and healer are jerks for taking so long between pulls and then
expecting everyone else to conform to their strategies. PUGs are not
the place for achievements. "

Have you spotted an Epic Thread on our forums? href="http://forums.tentonhammer.com/showthread.php?t=32559">Tell
us!

Mega
gaming portal gPotato has recently brought another massive PvP game to
our shores. Aika Online features 1000 vs. 100 battles, 100s of quests
and 6 unique classes. Ten Ton Hammer sat down with Christina Kelly,
Community Manager from Gala-Net, Inc., to discuss those classes in a
six part interview series. The first class we will look at is the
game's primary tank, the Paladin. What makes this plate armor clad
meatshield tick? Join us as we uncover the answers.

UNITY
is the superhero team of the UN in Champions Online. Once your hero
hits level 40, you're given the chance to join this august
team.
What opportunities and rewards does UNITY offer? Your friends at Ten
Ton Hammer are here to give you the lowdown.

The
mechanical monstrosities of the Commonwealth keep getting bigger and
tougher as you level. It's time for some new strategies to match your
new foes! We provide the run down on the new bosses and tactics to give
you the edge. You might feel overwhelmed by the difficulty of Global
Agenda at this point, but there's actually even tougher stuff after
this. Steel yourself and press on!

Star Trek Online: Captain's Blog - The Honeymoon is Over

Star
Trek Online is just about to hit that magic date in a games life which
is exactly thirty days after it launches. Sometimes its a day of
celebration, but more times than not its a day
of F-bombs--you
know, F as in Forums. The threads will all start and end with
someone who was entitled to more fun than they got. We're not sure
whether to say suck it up or just suck it.

Thanks
for visiting the Ten Ton Hammer
network!

Vanguard: State of the Game
<p> It's been quite some time since the Ten Ton Hammer crew gave a report on the state of Vanguard: Saga of He